Our roster of writing experts includes but is not limited to the faculty and fellows of the Sozopol Fiction Seminars network. Among them are professional writers, editors, translators, literary academics and writing professionals in various genres.

Elizabeth Kostova was born in Connecticut in 1964. She is the author of three novels, The Historian (Little, Brown, 2005), The Swan Thieves (Little, Brown, 2010), and The Shadow Land (Random House, 2017). The Historian was the first debut novel in U.S. publishing history to debut at #1 on the New York Times Bestseller List, has been translated into 40 languages, and won Quill and Independent Bookseller Awards. The Swan Thieves was also a New York Times Bestseller and has been translated into 28 languages. Her short fiction, poetry, and essays have appeared in such periodicals and anthologies as The Mississippi Review, Poets & Writers Magazine, The Best American Poetry, The Michigan Quarterly, and Another Chicago Magazine. Kostova has taught in programs at the University of North Carolina at Wilmington, the University of Michigan, Drexel University, the University of the Arts in Philadelphia, and Penn State– as well as at the Sozopol Seminars on the Bulgarian Black Sea and Bear River Writers’ Conference in northern Michigan. She reads and lectures internationally and is co-founder of the Elizabeth Kostova Foundation, which provides competitive opportunities for Bulgarian writers and translators, as well as opportunities for native-English writers to travel to Bulgaria. She also serves on the University Council of the American University of Bulgaria in Blagoevgrad and on the Council of the University of North Carolina Press. She has received awards for service from the Bulgarian Ministry of Culture and the town of Sozopol. Kostova holds a B.A. in British Studies from Yale College and an M.F.A. in creative writing from the University of Michigan, where she won Hopwood Awards in both fiction and non-fiction. 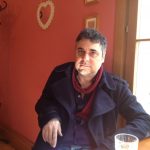 Popov’s first novel, Mission London, based on colourful impressions from his time as the cultural attaché at the Bulgarian Embassy in the United Kingdom, was published in 2001. It has been widely acclaimed as “the funniest contemporary Bulgarian book” for its sarcastic projection of the Bulgarian diplomatic elite. However in the beginning no mainstream publisher dared to publish the book fearing political consequences. To date, Mission London has been published into 16 languages and has 7 editions in Bulgarian. The film Mission London based on the novel was released in 2010 and according to Variety Magazine was “a breakthrough phenomenon,” leading the Bulgarian box office for weeks. It became the most frequented Bulgarian movie for the last 20 years. In 2011, it won the Unbribable Award of Transparency International Croatia’s program “Culture against Corruption”.
Popov’s second novel, The Black Box, was published in 2007. It appeared in German from Residenz Verlag under the title Die Hunde fliegen tief (Dogs Are Flying Low) and went through several editions. The book reflects Popov’s early loss of his father. A talented mathematician, he was regularly invited as a visiting professor in the USA during the 80ies. He unexpectedly passed away far from home while teaching at Philadelphia University in 89th. Back in Sofia arrived only a small box containing his ashes. Although inspired by a tragic incident the Popov’s story has little to do with any documentary projections. A darkly comic satire, the novel exposes human selfishness, greed and delusion that is found in every society – whether it be in the former Eastern Bloc or the West, a dog-walkers’ union or in the canyons of Wall Street, the rarefied air of academe or the Club of Successful Bulgarians. The Black Box won several awards including the Elias Canetti Prize and was further translated in Serbian, Turkish, Polish and Italian. However seven years later Popov decided to make a complete revision: in search for coherence and clarity, he rewrote several chapters and drew a new ending. In January 2014, The Black Box won the 2013 U.K. contemporary Bulgarian novel contest of the Elizabeth Kostova Foundation, organized in cooperation with Peter Owen Publishers. The book was published in English in April, 2015.
Popov’s third novel, The Palaveevi Sisters: in the storm of History, was published in 2013. The novel is set in turbulent times – World War II and the subsequent Cold War. Popov takes an unusual approach to the painful past and tries to see it through the lens of irony and humor challenging the clichés of history and propaganda. The book headed the Top10 list of best-selling titles in Bulgaria for weeks, won the Helicon Prize for new Bulgarian fiction and was shortlisted for Elias Canetti Prize. In 2014, the novel appeared in German (Residenz Verlag), under the title Schneeweißchen und Partisanenrot (Snow-white/Partisan Red). The book was adapted for theatre and put on stage by Plovdiv Drama Theatre in 2015. A film adaptation is under way. Currently Alek Popov works on the sequel of the novel.